Was talking to a guy earlier while filling up the Mocean mobile with overpriced dinosaur bones juice. He came over and looked at the van and said “What da hell does that say”? “Mocean, man, as in physical movement”.  Blank look..”Whatcha do”?  He asked kinda puzzled. “I help get people more active, kids, adults, ya know”?  More kinda blank look. “Look the obesity rate in this country is 1 in 3” I say, “and that means there are also a lot of unhappy people and that’s not cool, so I try and help”. “What?!  1 in 3” He exclaims, “That’s f%$%Ing insane”! “Yeah i know and kids too”, I replied. “Well kids are lazy nowadays, they don’t want to work” he said.  I replied, “No parents are mostly wimps (ok i used a worse word, use your imagination) who don’t instill any work ethics in their kids and let them get away with murder”.  He looked around my age so I said, “remember growing up, we climbed trees and used our hands and worked and”…”Yeah I grew up on a farm”  he interupted with … “yeah me too man” I say.  “So spread the word man, get people moving”!  He replied “Right on, keep up the good work brother” before he roared off. 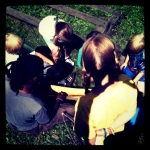 Got me thinking about this topic which is one we ALL know is a huge problem nowadays. Over Parenting for one, where parents baby their kids beyond belief. Many parents my age, seem to think that they can protect their kids from any impending anything by sheltering their children from the perils of the woods and the outdoors and the streets and the ruthless killers running around that FOX News tells them about. The “wear a helmet if you ride your bike in the driveway” parents. Over parenting is also the over scheduling of kids.  Having them play 10 sports and fill every waking moment with activities picked out by the parents.  The kids that have their own day planners (or smartphones).  “Well I’d like to climb trees with you but i have a violin lesson, then lacrosse practice followed by a session with my Spanish tutor then dinner.  How’s next Tuesday look for you”?

And then on the other hand is Under Parenting.  Letting kids run things and parenting by allowing technology to babysit them. The Playstation era.  Why the hell do these kids have phones and all this technology? Who bought it for them? Who allows them to have it? Just because their friends have them doesn’t mean they have to.  These poor kids will never know what its like to work with their hands and get dirty and earn their keep.

And what about discipline and respect?! What is that? I can’t believe the way i see some kids talk to their parents and elders. If I did that growing up than it would be to the woodshed for a A$% paddling or a quick cuff across the face. “Oh my gawd, is he advocating violence and abusing children”?! I can hear them now. Look at your parents and your grandparents and many of your own upbringings who got more than “60 second timeout” or sending them to their room so they just play video games. I think my mom and grandparents and even myself, turned out ok (well not too bad at least).  I’m not traumatized by the physicality of my upbringing and they aren’t either so get over it.

My point is the obesity epidemic and worse the unhappiness epidemic plaguing our country and many others, is not because “Kids are lazy”.  That’s a cop out and a slap in the face to these kids who don’t know any better.  Kids are usually a product of their environment.  I don’t buy that “well parents are under so much pressure nowadays” BS. Parents need to step it up and STOP BEING WIMPS!  Get a backbone and let your kids know whose in charge. If you love your kids then don’t feed them crap. Make them move their bodies and of course, do their part and WORK! Remember back to your own childhood or talk to your parents or grandparents and get some tips. Get them outside and let them climb trees and ride bikes and yes, they are going to fall down and get hurt. It is ok, that is part of the process.  And getting kids active does not mean turning them into little versions of you. Over booked, over extended, over stimulated with everything scheduled every second of the day with some activity.

Let them be kids. Teach, lead, love, listen and live by example. No I’m not a parent and that’s by choice.  Instead I’ve dedicated much of my adult life to working with kids and trying to help them even a little along their path. And that means i will advocate for them until the end. That’s the point of this post. Parents need to step it up or sometimes, step it down and be parents! The end.

One thought on “Hey parents (yeah you), STOP BEING SUCH WIMPS!!!”